Moody defense comes up clutch in 21-14 victory over Talladega

Talladega ends the regular season at 5-4 and will travel to take on Montevallo in the first round of the Class 4A playoffs next Friday night.

“We didn’t play well tonight,” Talladega head coach Shannon Felder said. “I thought we played pretty good on defense. Our offense put the defense in a bind a few times. We had a lot of plays that we could’ve capitalized off of, but we didn’t.

Talladega took a 14-7 lead on the opening possession of the second half. The Tigers put together a 57-yard drive that was capped off by a Quontavius McKenzie 1-yard score with 6:53 left in the period.

However, the lead was short-lived as Connor Rush connected with Robert Grames for an 85-yard touchdown to tie the game at 14-all.

Rush called his own number for an 18-yard gain to set up first-and-goal. Terrance Moore capped the march with a 2-yard touchdown run to give the Blue Devils a 21-14 advantage with 5:05 left.

On the ensuing possession, Tigers QB Nigel Scales threw an interception to Moody’s Adam Wallace at the Talladega 38.

Talladega, however, forced a three-and-out, giving itself one final chance.

On the first play of the drive, Scales connected with Michael McGregor for a 35-yard completion to the THS 47.

The duo hooked up again a few plays later, this time for 11 yards to the Moody 33. Talladega, however, failed to  move the ball deeper into Moody territory, which was a theme for the Tigers throughout the game.

On fourth down-and-9 at the 32, Scales’ pass was nearly picked off, sealing the win for the Blue Devils.

Talladega had chances to take control in the first half, but its inability to score in the red zone was the difference in the game.

On back-to-back possessions in the second quarter, Talladega had the ball at Moody 9 and 11, but the Tigers turned the ball over on downs on both occasions.

-Scales threw for 156 yards with a touchdown and an interception. Scales connected with McGregor for a 34-yard touchdown in the first quarter to tie the game at 7-all.

-Moore scored Moody’s first touchdown of the game. The senior running back reached pay dirt on a 15-yard run to make it 7-0 with 7:00 left in the opening period. Moore finished the game with 100 yards rushing. 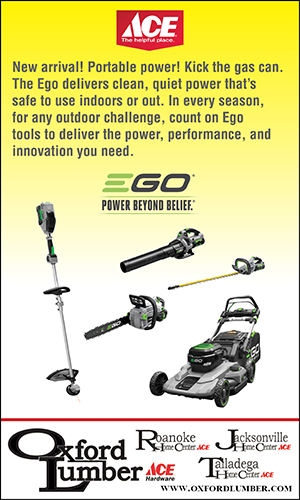 Moody head coach Adam Wallace on the win: “We came in saying that we wanted to send our seniors out with a win. Unfortunately, we are not playoff-bound, so we were playing for them, this team and community. We have 11 seniors on the field on defense at times, and my challenge for them at halftime was to go win it for us. You have 24 minutes of football left, so go win it for us. They made some big plays down the stretch. They got a big turnover and a big stop down the stretch. Hats off to Talladega, they have a very talented team. They have a chance to make some noise in the Class 4A playoffs.”

Felder on struggling in the red zone: “We just didn’t play well. If you don’t play well, you don’t capitalize off opportunities. We had several opportunities in the first half and the second half to get some points, and we didn’t do it. We have to go back and watch the film to see the mistakes we made, correct those mistakes and try to play better next week.”

Talladega will travel to Montevallo in the first round of the 4A playoffs Friday, Nov. 8.